Leg drive: As the acceleration begins from the ground up, the leg drive is the crucial element of the efficient movement (leg drive explained in details in the past blogs). Efficient leg drive enables hips to elevate, so the back hip achieves the higher vertical velocity then the front hip, which will enable the shoulder over shoulder rotation. 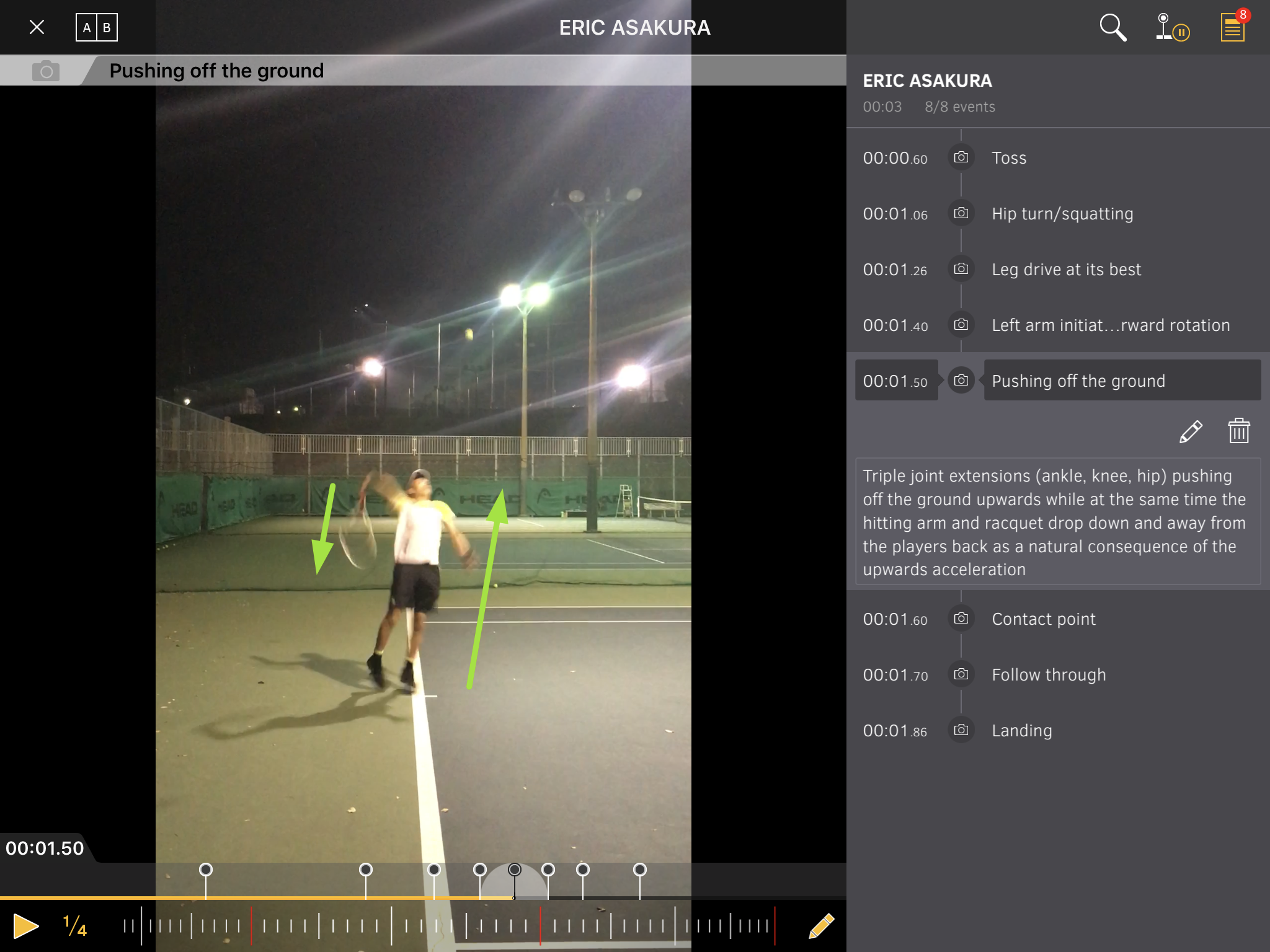 This linear momentum from the leg drive in combination with the angular momentum of the hip and trunk rotation creates the most efficient serve motion.

Feet and ankles: The player is creating the energy from the ground up, pushing against the ground with the toes.

The front foot, front leg and hip are providing body the stability needed for the efficient trunk rotation in the angular phase of the acceleration. The energy for the powerful vertical velocity is stored mostly on the slow back leg muscles, supported with the back foot and ankles. So in simple words, front side is the stability side and the back side is the power side.

How does the energy transfers through the ankles? The strongest movement of the ankle or foot is a plantar flexion, as the larger muscle mass is contributing to the movement. Plantar flexion is used to propel the body forward and upwards, and that’s exactly needed for the powerful but stable acceleration.

Knees: More powerful knee extension produces much faster acceleration phase. The producer of the extension at the knee is the quadriceps femoris muscle group, which is one of the strongest muscle groups in the body. 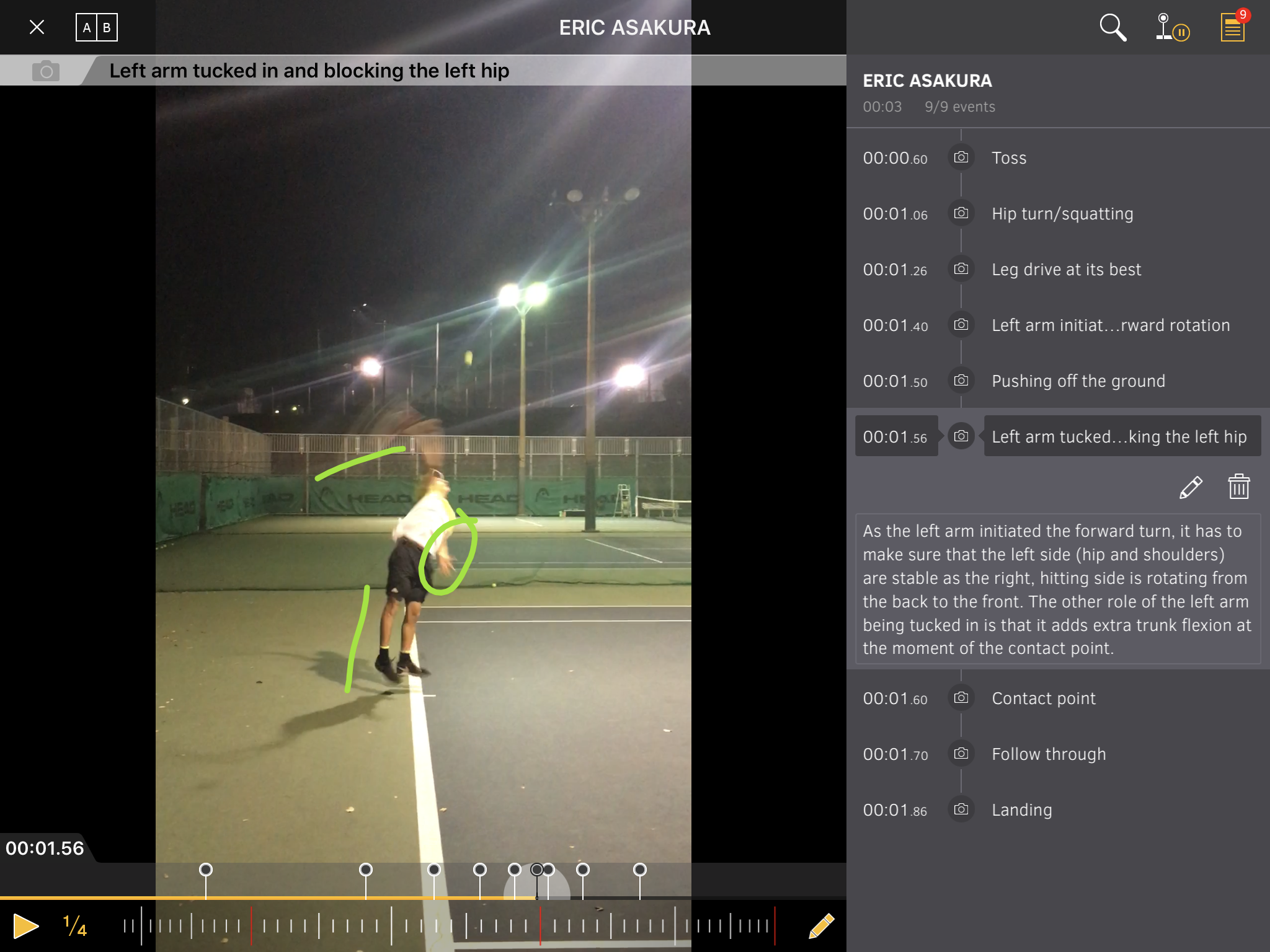 Increase in the knee flexion and extension is being associated with creating higher racquet velocity forces and with placing less load on the hitting shoulder. Peak extension is achieved at 50-70 degrees of knee flexion. 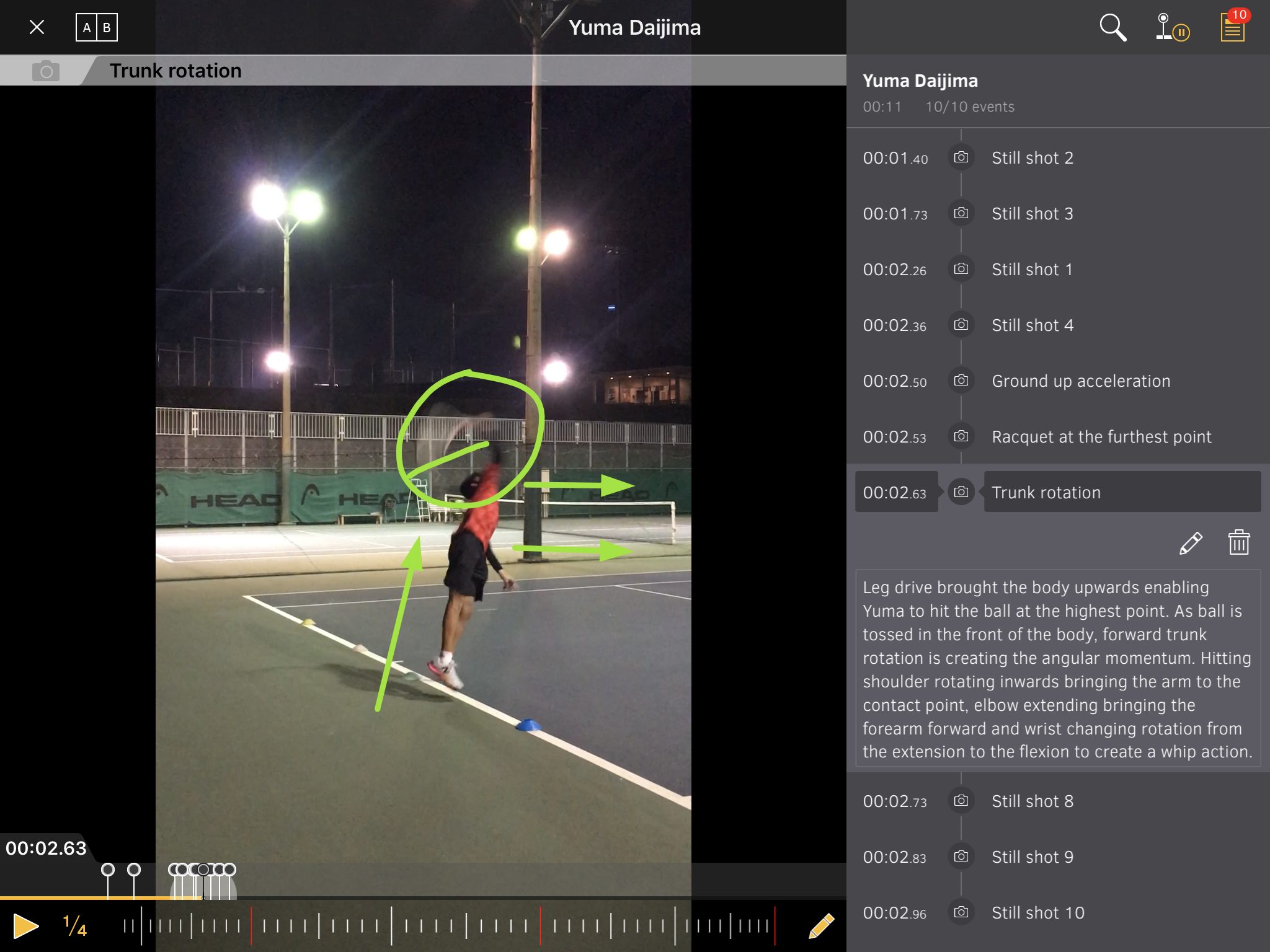 Trunk: The acceleration phase is the phase in which the trunk muscles are getting used the most. Trunk rotation contributes with around 10-20 percent of racquet speed at the impact.

In order to generate the maximal amount of angular momentum possible for an effective serve, there is a necessity for a fast, rapid movement of the trunk, which is in fact uncoiling.

Shoulders: The upper arm is involved in explosive inward rotation prior to ball impact, which places great deal of stress on the shoulder region. The most efficient consequence of the leg drive is that it forces the racquet in a downwards direction. Direction away from the back of the athlete. As the shoulder is in an external rotation in the cocking phase, the leg drive gives an additional degree of the external shoulder rotation as racquet and arm are pulled downwards by gravity rather then muscle force. 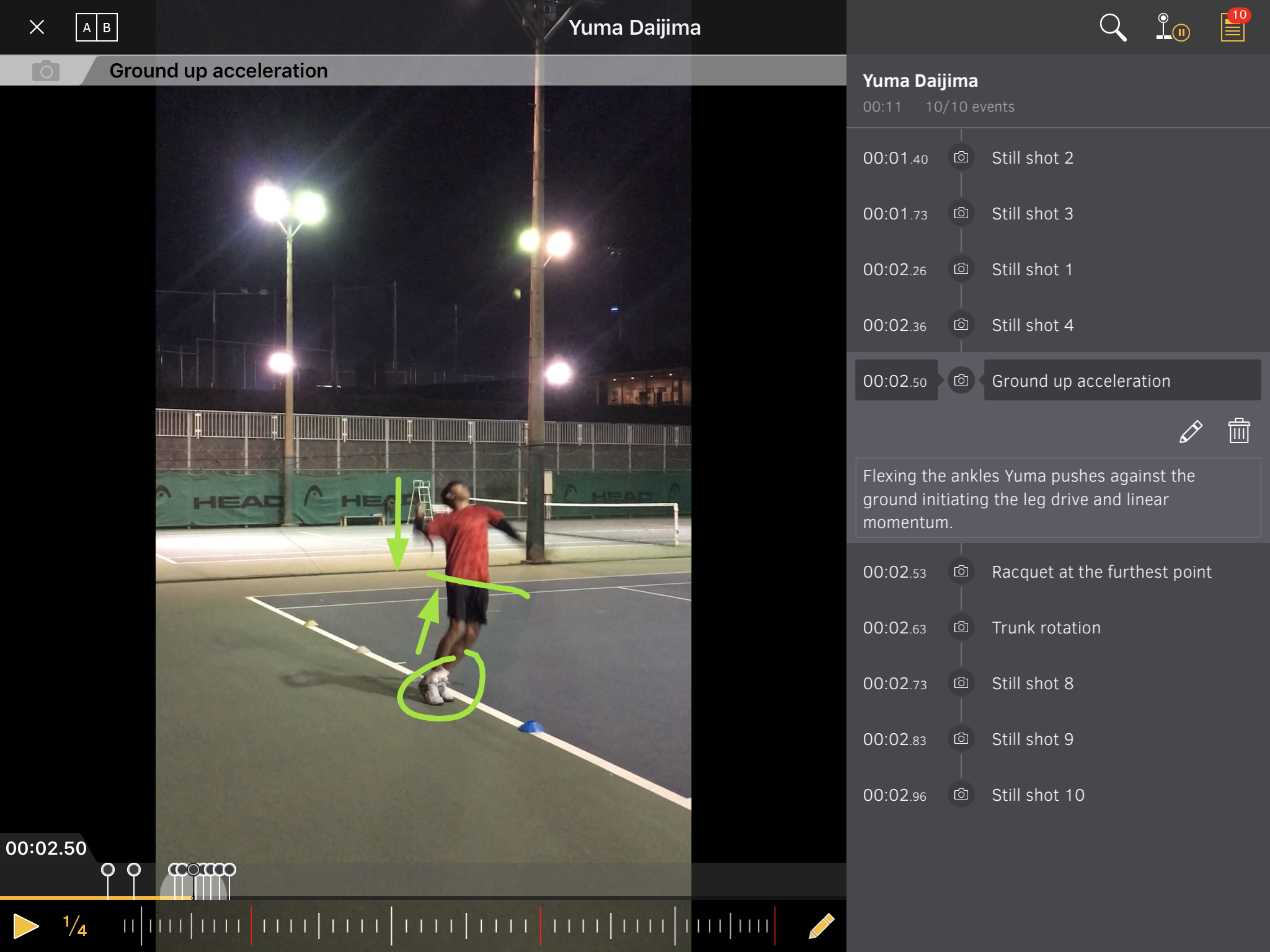 This (healthy) additional external rotation has for a consequence more efficient and explosive internal rotation of the shoulder towards the impact zone. At the same time, the player creates an extra distance from the tip of the racquet to the contact point before the forward rotation of the trunk. Longer distance = higher torque.
As the hips muscles begin the trunk rotation, the shoulders are following the motion and hitting shoulder from the external rotation is rotating internally through out the acceleration phase(from away of the ball to the contact with the ball).
Very important aspect of the shoulder rotation is the cartwheel rotation, shoulder OVER shoulder.

Elbows: During the acceleration phase there is high triceps activity as the hitting elbow is extending. Hitting elbow joint contributes around 15% of the force produced during the tennis serve. 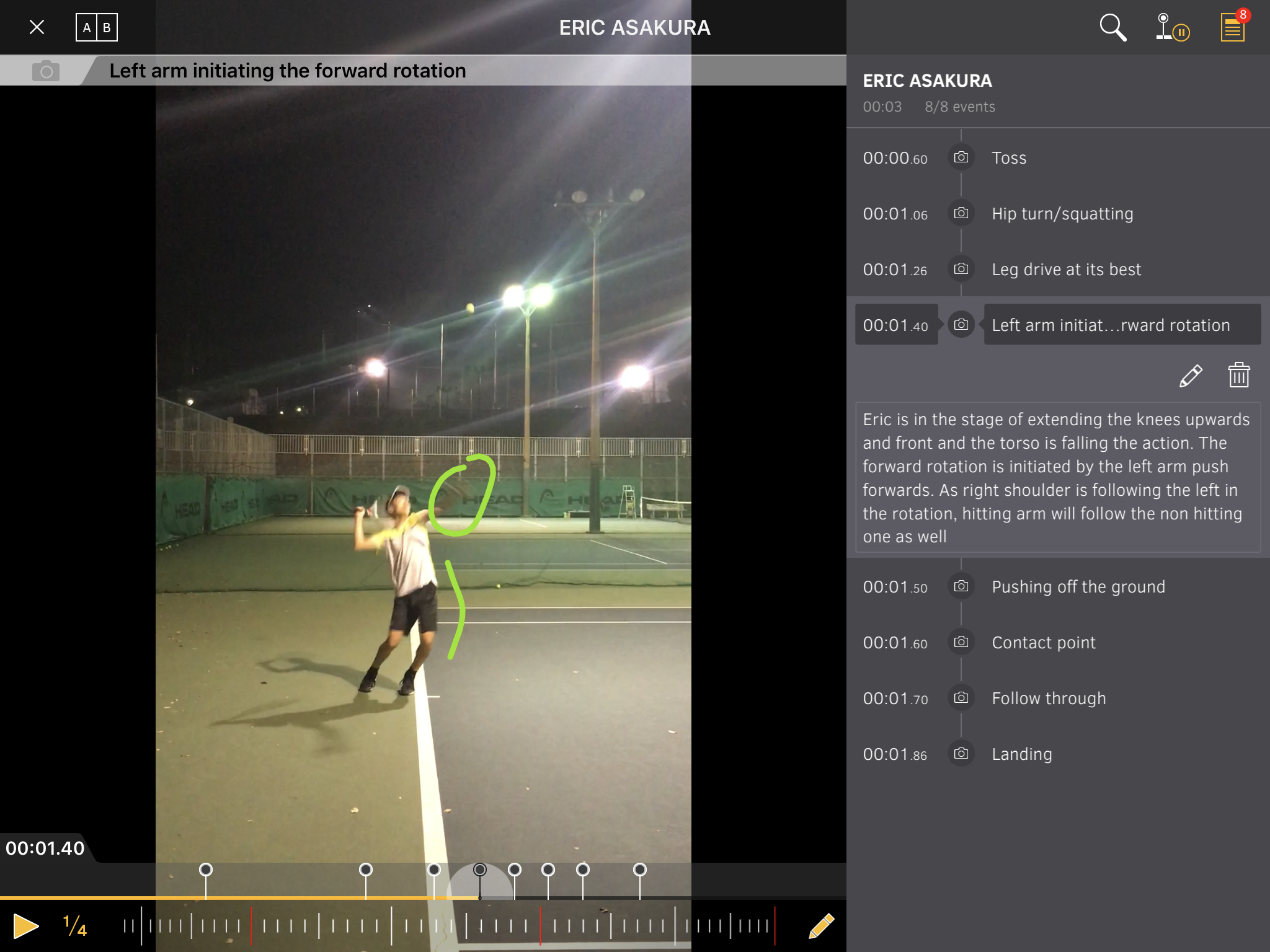 Left elbow has a very important role in the acceleration phase as it initiates the forward trunk rotation (quite similar to the forehand stroke). 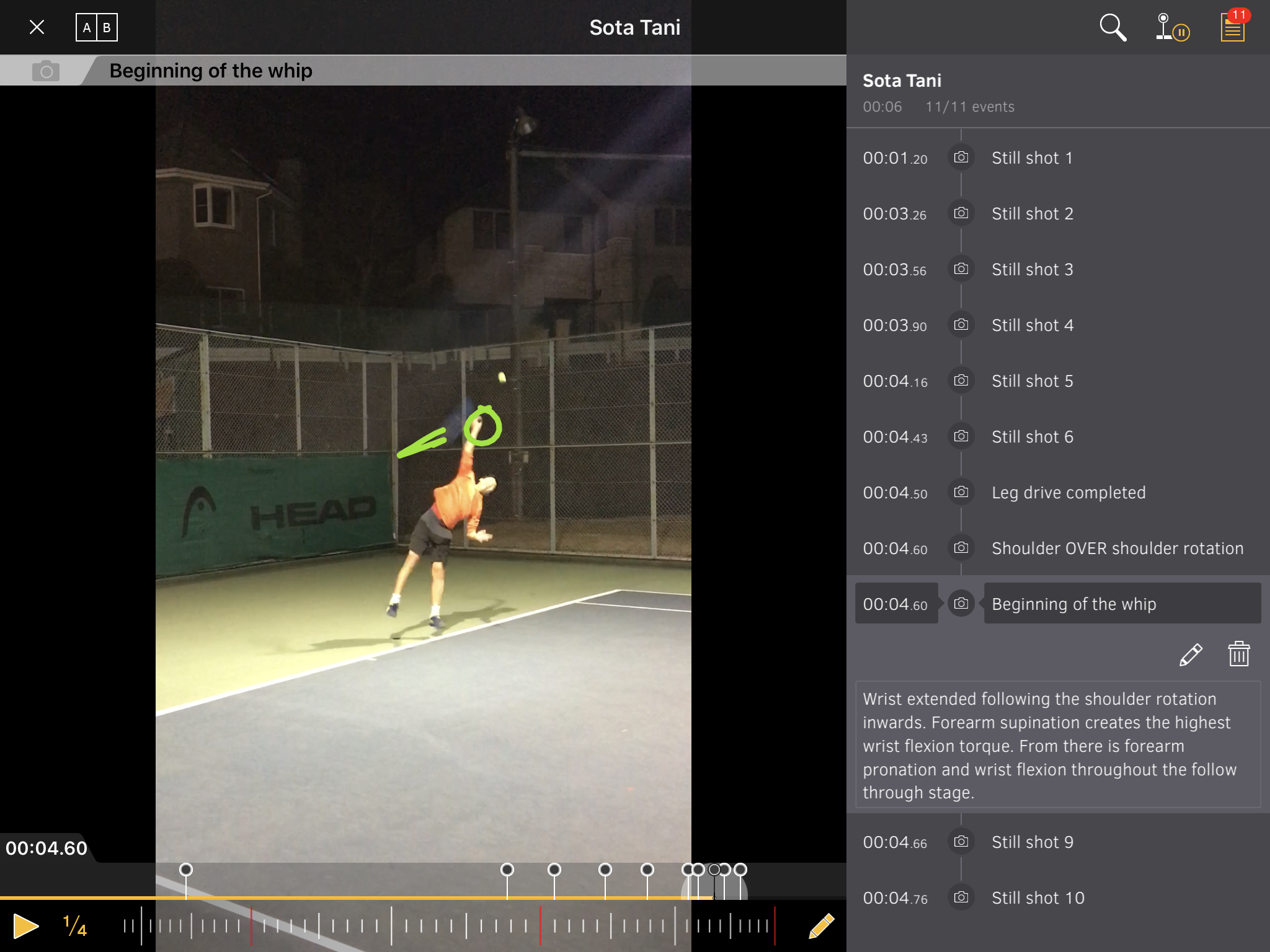 As whip action contributes at around 40% of the power of the serve and fully controls the direction of the serve, we come to the conclusion that the supination of the forearm represents a very important aspect of the serve. Throughout the acceleration phase, the forearm rotates towards the pronation while shoulder is rotating internal and inwards, wrist is moving towards the impact zone from the position of the full extension to the powerful flexion.

Four months of amazing information packed course of Neurobiology in Sports Performance is completed. One more step closer to my own neuro-muscular tennis methodology! BARCAINNOVATIONHUB has proven to be one of the most successful sports performance entity to learn from about innovative approach to sports performance and training #barcelona #barca #barcainnovationhub #neurobiology #neuroscience #sportsperformance #neuromusculartraining #tennisperformance #practicewhatyoupreach #challengeyourself #pushyourlimits #sportstraining
Unleashing your energy throughout the impact zone starts with the leg drive. To keep control over direction, left arm is needed as much as possible. I love Mamori’s forehand! Poetry in motion:) UNLEASH YOUR SPIKES #forehand #energywork #poetryinmotion #tennis #unleashyourpotential #everymomentcounts #tennisplayer #juniortennis #tennistraining #practicewhatyoupreach #tennispractice #テニス #テニストレーニング #テニスジュニア
Support to me and my work in Japan has been nothing but fantastic from the Babolat team! Now they supported the club proving to be number one tennis brand at YCAC！ #babolat #babolatfamily #babolatjapan #ycac #ycactennis #tennis #tennisracquet #tenniscoach #juniortennis #tenniswear #tennisapparel #tennisacademy #yokohama #テニス #テニス部
1. We are dedicated in making smart thinkers and resilient fighters at the court. It’s the only way to be a champion. 私たちはテニスに関して考えてプレーを行い粘り強い選手作るために努力しています。粘り強くまた戦略をしっかり考える選手が真のチャンピオンになるからです。
Reaching for excellence is never ending but passionate journey. Very proud of USPTA specialist achievement in one more area of tennis #tennis #tennis🎾 #tenniscoaching #tennistraining #tennispractice #tennislife #tennisrunsinourblood #tennisacademy #uspta #テニス #テニストレーニング #トレーニング #tennisfitness #tennisconditioning
Coaching tip number two for two handed backhand. Upper arm on the grip is always late when following through. This makes upper body rotation more prone to changes. Use it wisely to make your stroke unpredictable! #tennis #tennis🎾 #tennistips #tenniscoaching #tennisbackhand #biomechanics #tennistraining #novakdjokovic #テニス #テニストレーニング #テニス女子